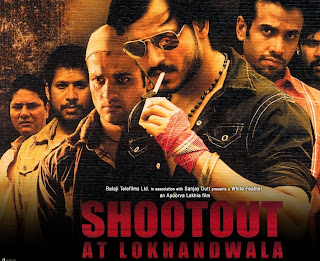 Today, the day started with an early morning surgery. I had to disarticulate the arm at the shoulder of a young male patient who had sustained a rail trafic accident. The surgery finished by 7 AM and I had enough time to read my newspaper while sipping coffee in the early morning sunshine at the mess.

After I showered and got dressed, I headed straight to the Operation Theatre. There I was informed that I was not supposed to wash up for surgeries as there were adequate hands. Instead, I was supposed to take rounds. I was doing that when I was called to assist another surgery.

I obliged and was happy to be assisting a relatively common spine surgery, done by someone who everyone looked up to. As I was washing up, I remembered my conversation with E-boi earlier on in the morning. He had asked me to arrange for tickets to Shootout at Lokhandwala. I asked a very faithful servant if he could do the job for me; a ticket for two at the second show at the nearby theatre.

It was the First Day of this mega blockbuster movie. I didn't have any hopes of getting tickets before the show. To my utter surprise, the servant said yes and as I was washing out of the surgery, he brought me tickets. But he did flash the news item all over the OT; 'Kris is going for a movie with a date.' he had said.

I looked at the tikets and was alarmed to see that it was for the first show and not the second. I immediately rang up e-boi and told him that there was a change of plans. He said he'll still make it.

Therefore, after my afternoon OPD, after a liesurely cup of coffee at the Tata Memorial Hospital OPD watching the Indian batsmen winding up a day of 'whacking' of the Bangladeshi bowlers, I headed to the theatre. It was almost housefull by the time I reached.

E-boi came on time and we were happy to have decided to come for this show.

Also, Sanjay Dutt was amazingly sexy! Whoa! What a role he had! And what big hands does he have! Oh my goodness, I can't even think of the possibilities.
Posted by Kris Bass at 01:41