Re-union which didn't take off 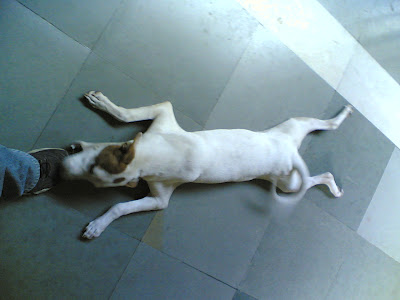 Don't get disappointed. On the contrary, don't get excited. Shade had unofficially re-united! I haven't been blogging regulary to keep up the tab, but yet, it had. It took about a week for Xander to realize that our dream, which was shattered in the argument, was more important than anything else in our lives. That's why I had gone back the next day to apologize. But that hadn't worked.

Whatever, today was almost the perfect day. Friday evening, too early in the weekend to get drunk, should have been the day to get going. I picked up e-boi from office on my way to Xander's place for re-starting the 'process', and Parry was there at Xander's apartment. Thing couldn't have been more ideal for a re-union.

Yet, me, E-boi and his friends had dinner over drinks, and in the process, got drunk. It was too late and almost predictably, Xander rang up e-boi and said it was 'too late'. I had to pick the call up because e-boi had gone to get his 'gutkha' sachets.

So, we didn't re-unite technically. Just that I dropped my amps and my bass guitar as Xander's place. And didn't jam. Instead, I got 'high' and I'm posting this immediately after coming back to my room.

This day is so representative of a state of indecision, doubtfulness and irony so typified in the photograph of a adolesscent dog in my hospital campus who's picturised to be chewing my shoe while wagging its tail.