The weekend of Rock

In the three years of my stay in Mumbai, the only thing that I look forward to with anticipation on a yearly basis is Independence Rock? This is the biggest rock festival in India; something like WoodStock! It's been going on for 23 years and this year it's going to be the biggest.

The extravaganza has a national level competition where bands in the major cities get to contest for a place to play at the grand finals in Mumbai. This year's competition is about culminate soon; Mumbai's regional finals taking place tonite and tomorrow night. 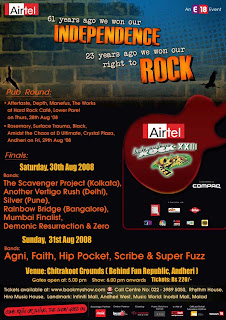 After that it is pure bliss of the big stage which also happens to be right across the road from my apartment building! That's over the weekend where the monster bands fo Rock will also be playing to the biggest rock audience; in thousands! It's huge! This year three of my favorite bands are playing - Demonic Resurrection, Zero and Superfuzz! I am looking forward to watching Scribe again (they won last year) and Agni, one of our competing bands!

As usual, I am probably the only person in my band(s) who's this excitable and I have messaged all of my bandmates asking if they are interested to join me at these venues? I don't expect anyone to turn up really. Trust me, I don't understand why they wouldn't. It's the biggest thing in Indian rock after all! I even asked a few gay friends of mine. Most ironically, Vikster who we are all familiar with dumped me. Again!

Kris: 'Hey Vik, are you interested in joining me at the Hard Rock Cafe tonight? There is a rock show going on there. It sure would be exciting!'

Kris: 'Come on, you could still have drinks at the HRC. And besides we could spend the time together! You promised me drinks remember?

Kris: 'Honey, the most important thing in my life is Rock. I could skip movies, food, lays etc for it. And I mean not the potato chips.'

Hence, coming back to you guys, I'm asking you guys whomever who is in Mumbai if you were interested in joining me to have fun at the venues on the sidebar. First of all, all those who are interested in being kind and generous could buy me food and drinks. For those who are in awe of my recently adorned micro-celebrity status, I could give you autographs (on any thing) and that feeling of having spent an evening with a very nice guy!

I meant, I'm having drinks tonight at Zenzi and listening to some good house music...which is more my style than hard rock (sadly).

On the other hand, if you'd said hawaiian shack, I would have been there like a flash!

You know, if I was in Bombay I would've gone with you, but then I really cannot tolerate Indian rock fans. Sorry. :P ...

SO I guess it worked out fine, eh??

@ ramby: Fuck, I would have loved to hang out with you! We could still have had some fun!

enjoy kris.. and hopefully you will find some rockers to be there with ya... and buy you drinks too :P

@ BK: Why do you think nobody ever in Mumbai responds to my blog requests? I think I'm scaring people off!

darn, i would love too! provided you would get be a bit naughty after intoxicating you with my free drinks...hahahaha! just kidding...

haha Kris,
may be they all know u and abt Vinokur, so they don't want to meddle in. hehehehe
just kidding...

may be they fear of paparazzi running behind celebrity Kris? hehehe

very funny, u say this on the day of the event.. what u think my dad is mallya who will send his special jet for me to fly to mum... :):)

@ Pepe: What a ghastly idea. Eww, I mean how could you even think... When are you coming down?

@ ramby: Seriously dude, why don't you e-mail me? Serious!

@ bloggingknight: Yeah, perhaps. But I think I'm an obnoxious freak just like Fly always tenderly refers to me. Papparazzi, I'd hunt down the Papparazzi myself - hey there cutie, wanna get laid with me?

Oxy, there are three more days! Okay? You and your Dad can figure out the private jet thingy!

hahaha really? Don't think tht way. If you begin, then Swati will kill you :P lol
Be positive man!!

And about Papparazzi, hehehehe and tomorrow again Kris has to quack in front of Vinokur in skype :P (after all Paparazzi will do his job, he just got laid with celebrity Kris. may be banner in Midday?)
hahaha

@ BK: Why should Swats want to kill me? And what if I can keep it under the cover - the Papparazi!