The Queer Azadi pride - a report

The day had begun well despite me not getting enough sleep overnight. I was with Vinokur very late, you know. I had a very long day. First it was the sound-check at the NM College before the gig. I was very thankful about the fact that for the first time in about 6 months, we got help for transportation of our instruments. The festival organizers were gracious enough to send us a couple of cars so that the actual lugging of instruments was reduced to a minimum. The actual sound-check didn’t go all that great. Again, some professional mishaps from my end, as I was convinced by my fellow band members.

Feeling disappointed but hopeful that the parade will cheer me up, I headed home at the strike of noon. I knew I was going to be late. I had to shower, dress and go half the way across Mumbai on a hot and humid afternoon. I tried calling a couple of friends to see if they were passing by my apartment. But everyone was already half-way to the destination. After my shower, I decided on wearing the one of the new tees that I had purchased for the events of the day. That went along with a pair of Levi’s L 531 jeans which reall y are discardable.

Thankfully, I was able to get to the station rather quickly. I carefully surveyed the stations for groups which might be going to the parade. I couldn’t find any although I did see a disparately high proportion of well dressed women on the platform. As always, Mumbai’s suburban trains were brilliant and I managed to reach the destination about 10 minutes before the starting time for assembly. I had to walk from the station to the August Kranti Maidan as I was not able to coaxe cabbies to drop me; I suspected sexual discrimination before I realized that the distance was rather miniscule.

I saw a bunch of media trucks in a row with reporters with cameras and microphones standing anxiously at the gates. Inside the maidan, I was surprised to find a lot of people and most of them seemed to have forgotten to dress. My judgement was proven wrong when I found that more than half of them were assembled there for something else going on in one of the two vacant spaces separated by a walk-way. On our side of the ground, I see a group of transgenders getting ready with make up dresses, facial paints etc.

The one thing which attracted me most was the rainbow-hat that I saw a few wearing. I wanted to get one and as I searched for some familiar faces, I was able to locate its source. I chit-chatted with a group of women who appeared to be straight before buying the hat from one of them. It costed me a mere 100 Rs. The women were pleasantly surprised (or so they seemed) to find a regular straight-looking guy with beard et al was sporty enough to buy a hat.

As soon as I wore the hat, things seemed to change for the better. I found a lot of my GB friends walking in with some of them wearing gorgeous outfits. A few minutes later, I was requested by Nitin and Vikram Doctor to give interviews to the media channels. Apparently, I was a good candidate and I was the only Mallu amongst the group. I wasn’t sure of this really. I was surprised to see myself standing next to Nitin whilst he gave a press interview in Hindi to a group of cameras and reporters of almost all the major Hindi news channels. Thankfully I was not asked to open my mouth. I just kept on smiling into the camera.

There were masks, flags, stickers and t-shirts (the only things which were way too expensive for me). I got all of them and decorated myself. By 2.30 in the afternoon, the group had grown to a sizeable crowd. The spokespersons of the various groups and alliances started giving speeches to the crowd. Lakshmi and Celina Jailed took all the attention of the media as you would expect.

Soon, we all set for the march. The group must have been over 500 by then. I chose a wonderful friend of mine as my date for the march. We held hands almost for the entirety of the march. I was holding a poster of the rainbow-torch almost throughout the march. We chanted slogans, sang rather frivolous parodies of bollywood hits and enjoyed the entire march. 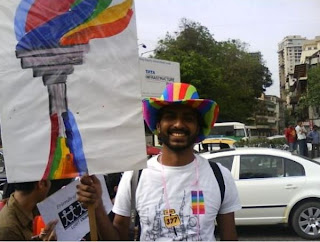 In between though, I gave interviews to a couple of newspapers (TOI, Today group and a gujarati newspaper) and a Malayalam TV channel (Manorama). It was a hard decision to make initially. But I decided that it was time to be brave and to come out to the media. The questions were clichéd and apparently no one seemed to believe that I was gay (strange!). They also worked at the doctor angle and the partnership/marriage angle. The weirdest part of the entire thing was this feeling that my Dad and Mom would call me to ask me ‘Why didn’t you tell us first before announcing it on national television?’

The march ended at the Chowpatty where we hung out for half an hour or so. Some of the group with more limber bodies even danced to drumbeats. At 4.30, the police asked us to disperse. And I had to get back to the college for the gig. Hence, I walked with a few friends of mine to the station.

I got a lot of strange looks from people for my hat and the banners that I was carrying. But it really felt liberating to sit in a crowded Borivili local in the evening with splatter of colors. The public didn’t give me the smirk or the rude comment. Yes, Mumbai is growing up.

To end my little mal-written report, I would like to say that I was not really happy with the entire thing. It looked more like a circus rather than an human-rights march. And the media, well they really want just to sensationalize issues. They probably are not really looking to help us by covering this march.
Posted by Kris Bass at 23:49

Congrats, you are brave, sensationalized or not, people need to know that you exist, they can't say they don't know any mallu homo's anymore, how many times have your heard that one? ---and a productive and relatively well adjusted one at that. This is great conversation around this next oonam or one of those boat races down south, did you see "so and so's son at that parade, the doctor, YES THE DOCTOR!!!" The kids you adopt will be proud of their Gay Dad.
--Quested

Thanks a lot for that message, dude. That made my morning! Well, that along with a comment on the Noise Market blog.

It would be great if I actually managed to change the mindset of a few Keralaites with my pres s appearance.

don't worry about changing any minds, just be who you are, someone people like and then people will change, you're talking to an x-thin person who got fat and then lost all the weight --u don't lose the weight till your damn ready, same with public opinion. Be a person people just want to like no matter what
(not just stalk) --Q( jeez, talk about cheesey, oy I stop now or kill myself)

You just got yourself a regular reader for your blog, dude!

@ Q: You always bring a smile. Keep on doing that. Cheesy or whatever!

@ Samudrika: I'm glad you like my style. You are very welcome!

I want tht luvly rainbow-hat :-)
and wht the heck was Celina Jaitley doing thre? flaunting her assests i believe..

u know a section of the media is still sensible n responsible..its unfair to generalize..v r waking up to serious issues also

Celina was supporting our cause citing the loss of her friend as the reason.

Well, I know I shouldn't have generalized. But you know, when it comes out like that, it really doesn't mean that.

Anyway, you understand what I mean.

Wow! I wish I had been there. We could have masqueraded together in rainbow hats and tees. Bravo for being so brave and coming out on national television. I wonder when my chance will come. I lived in Kolkata for four years and missed every single pride march because I'm not out.

You look great in that white tee.

@ Firbolt: Are yo a bong? Thanks for the compliment. That tee is cheap at just 199 Rs!

Get me one of those tees too, lol!

It is very courageous to open up in public media before coming out to parents. If it was me , it would be better for the parents to hear from me instead of newspaper. Keep me posted if it comes on malayalamanorama. I was surprised many main newspaper hasnt published an article on Queer Azaadi.

@ Tapak: Yeah, I know it's courageous and stuff. I guess it hasn't come online anywhere!