Joe said it was fantastic. That made me doubt whether it was – we have never quite liked the same movies. But everyone who was someone was talking about it. It had to be a good movie. So I decided to watch it. There was just the one show in the whole of Mumbai and that was at 8.30 pm at INOX at Nariman Point.

Yesterday and most of today, I asked almost everyone who I could possibly invite if they were interested. Some where, but the distance was too much of an effort. Finally, on my way downtown in the train, my Indian friend, who has been very kind to me during my depression, said yes. I was almost relieved.

We reached just in time and it was really fun to meet him after a long time. He looked simply gorgeous and I so wanted to flirt with him. But the more important thing was the movie. Yes, the movie. It was simply marvelous.

People might complain about Hollywood stereotyping India. But I don’t take that bullshit. The bottom line is that the characters were wonderful, the acting was brilliant, the screenplay was engaging, the casting was near perfect, and the cinematography was excellent. I could relate to each and every character. I could also fall in love with a couple of characters/actors. 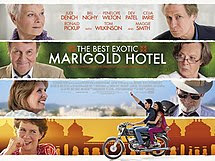 After the movie, we went out for dinner – roti and dal at the newly refurbished Café Ideal. It was quite an experience!