Live Free or Die Hard OR Die Free after watching it 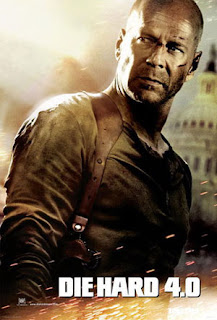 E-boi's outta town visiting a friend of his he always refers to as 'Didi' (meaning 'sister' for those who are not well-versed in Hindi). That meant that I didn't have anybody to go with for movies. I had tried my patience on Friday night and Saturday afternoon. On Saturday evening I sent out an SOS to Parry, Sandy etc. but no one was willing to join. My roomie, who is neck-deep in his USMLE preps, refrused as well.

Today afternoon, I had vowed to go watch Live Free or Die Hard. I had a lot of silly chores to wind up as well. Chores like buying Marvel Comics, going to the bank etc. Uhh well, sorry for passing the Marvel Comic thing up as a chore. I know it isn't. But still, it had to be done.

So after a careless nap watching the Alien 3 (about which I'll write elsewhere), I jumped out of bed, slapped my chest with both upper limps like a gorilla and screamed 'I wanna watch Die Hard.'. That didn't help convince my roomie though and I left alone. I like that actually.

In the process of reaching the Sterling Cineplex, I learnt a few lessons in life. One thing, I travelled in the Central lane south of Parel for the first time in my entire life... or so it seemed. It did seem a lot less congested and somehow easier to travel in (as compared to the Western line). Then came the lesson of a life time. Never, ever, get into the Fort ICICI branch on the 2nd of a month at 6.22 pm. I had to complete a transaction for my roomie. It took me, to the minute, 1 hour 13 minutes to set out of the bank after completing a lousy 30 grand pay-in transaction.

In the process, I ran out of battery on my Zen Micro, I ran out of patience again trying to outwit my own predictions as to when my number on the token is going to be announced. It was a heavy ordeal. Something totally unexpected. It also left me short of time to search for Marvel (Gotham) comics on Fashion Street. But I eventutally ended up buying a few old comics out of a store which seemed a lot smaller than the other shops.

At the cineplex (I love the name), I was greeted with pleasant surprise as I got a fantastic seat despite coming late; somebody wanted exchange for getting a pair of seats close by. And I was so happy to get into Screen 1 (the best screen by far at the Cineplex) and to find that it's an awesome seat.

The trailer of Transformer, for which I'm eagerly waiting for, set the tone. But the movie was fantabulous. Really! Screw Spidey, Fantastic Four, Jurassic Park etc. Bow to amazing special effects and animation! And to top it all, a very very funny script! The whole movie theatre was in raptures through out! To top it all, Bruce Willis!!!!

Even without the Bruce Willis in the equation this movie is 4 star. Maybe even 4.5 stars! Go watch it... cuz you can Die free after you watch it!
Posted by Kris Bass at 23:54