A Beautiful Day in the Neighborhood

When I saw the poster for A Beautiful Day in the Neighborhood on BookMyShow, I thought that it looked funny. Throwback color schemes, Tom Hanks looking overly a in a light red sweater, and the words neighbor, icon, friend in an oversized font. 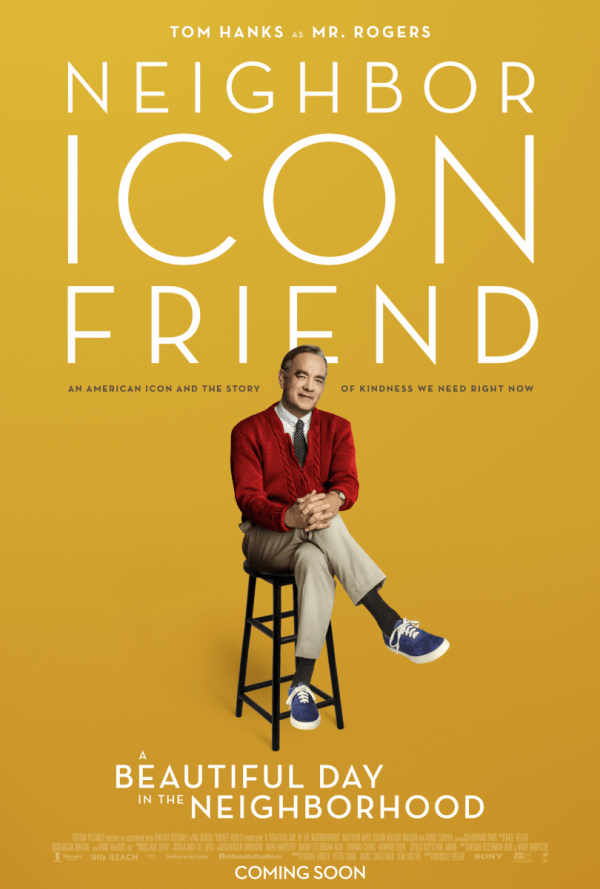 The movie was one of the three running last week that seemed worth watching. Judging by the relatively sparse listings, it was also the most "indie" among the three. Unlike most passionate movie-goers, I don't do much research on movies before I go watch them. Because it is the Oscar season, I generally end up having even better experiences by immersing myself in something that seemed to have happened more by chance than by meticulous planning, which is what my life seems to be more than I'd like to admit it is. And this is why I decided to try and gobble the movie up as the first chance I could, despite the scheduling gymnastics that I needed to do.

The movie began with an '80s looking shot of Mr. Rogers--the character Tom Hanks plays--sounding and looking funny. It was fairly obvious that his intended audience was not people like me. I guess the director wanted people like me to feel just that because I fell for it hook, line, and sinker. I guess I ought to clarify that I had no idea what I was getting into. Mr. Rogers was not a thing in my childhood, which technically started in late '79 and must have ended in the early '90s. My household was without a television until 1987 and without cable television until '94. The first thing that I remember looking forward to watching on TV was Giant Robot and Friendly Neighborhood Spiderman, that too on the national broadcaster Doordarshan. Since then, almost all of my non-sporting leisure time was usurped by the once-great MTV once I had cable.

In other words, I was an absolute virgin for Mr. Rogers and his famous TV show for kids. In fact, the movie is about a character--the jaded journalist Lloyd Vogel--who was pretty much in the same headspace as I was at the beginning of the movie. Lloyd is a cynic/critic who writes harsh articles about celebrities in Esquire, who, when given the assignment of writing a 400-word flattering piece on Mr. Rogers, reacts with a mixture of shock and disappointment. He thinks Mr. Rogers is just a TV show host putting on a fake character to get fame. I might have felt like Lloyd at the beginning of the movie, but by its end, I was like Lloyd's wife Andrea, who cherished the show and had uplifting moments in her childhood because of the show.

Lloyd is an interesting character--from my perspective--himself. His cynical self is probably a result of a troubled childhood/early adulthood thanks to a traumatic relationship with his father. Lloyd is still recovering from the trauma of watching his mother succumb to cancer after a painful terminal phase. He feels betrayed because his father Jerry wasn't there to support the family during this phase. Jerry, on the other hand, seeks help from other avenues of support while grappling with the loss of his wife, ends up in a relationship with a woman (too soon for the likes of his son), and eventually marries her. Lloyd also has an elder sister with whom he shares a complex relationship. Lloyd is married to Andrea, a grounded woman with a different upbringing, and is now coming to grips with the responsibilities of a father.

It is at this phase when Lloyd's employer assigns this task. Over several interviews with Mr. Rogers, Lloyd begins to unravel the mystery of the charm behind Mr. Rogers. At the same time, Lloyd also gets perspectives on his life, his relationships, and his responsibilities, thanks to the sagely insights that Mr. Rogers offers. Lloyd loses the cagey skepticism about Mr. Rogers and also about such people in general--the people who find a way to be empathic to others no matter what the situation is.

Mr. Rogers was/is everything that I wanted/want in my life to set things in perspective. He seems to have a bottomless well of kindness and is a master at making people he meets and interacts at ease. He is someone who can talk about something and would make sense to both children and adults without making either group uncomfortable in the way they are being talked to. The body language, the expressions, the choice of words, the tone of voice--everything seems to be perfect for an empathic connection. On top of all of this, Mr. Rogers is an actor, performer, musician, composer, songwriter, and much more. The topics that he addresses are dark concepts like anger, jealousy, death, hospitals, friendship. And yet, the words and the phrases that he chooses to use in his songs are available for everyone.

Fred Rogers seems to have been every bit what the poster said: a neighbor, an icon, and a friend. Mr. Rogers, through his show, its characters, its songs, and its conversations would end up educating children about the mysterious, difficult world that they were being ushered into without much preparation. This is the sort of thing that everyone needs, regardless of the time they are in or the age they find themselves in. Like Lloyd, I felt like watching clips of the show and learning more.

There is nothing more in the world that I seem to want than someone like Mr. Rogers in my life. Someone to help me find my empathy and lose my eternal cynicism.
Posted by Kris Bass at 22:18

Nice information, thank you. Also visit my article about life thoughts and quotes in Hindi