The story of Ugly and my response

*For some weird reason, My friend and fellow book club member forwarded me a story of a cat called Ugly (see attached image). Although the story is graphic (in a negative way about Ugly being treated badly), it ends with the author(s) being positively influenced by the valiant cat.

(*Edit: Since I published the post, my friend and I had a conversation. She thought that despite the sad story, this was a a good example of unconditional love by an animal, which I would related to because I'm a cat lover; of course, her intent was not to make me feel bad or to trigger traumatic memories. This conversation happened on the book club group chat, and one other member pointed out the perils of feel-good stories: "Always missing the point that not everybody reacts to the same to a scenario."  A very valid point, I think.)

I have had a storied life of being traumatized by experiences of cats in peril. Ugly's story thus forced me to respond in the following manner:


Sorry for the essay response, but I had to.

I don't know if you know this, but I have been at the wrong end of cats being mauled. In Kerala, I have always had cats/kittens with me. Some of my dearest cats have died grueling deaths thanks to packs of dogs mauling them. I would be woken up in the middle of a rainy night just to hear the last part of the fight, and I would be so bitter and upset with myself of not having been there to help them. The next day morning, I would have to find their bodies and bury them. Happened to me at least thrice, and I have always had a problem trying to get over this.

In fact last year, there were a couple of nights when I couldn't sleep because I thought Spock (image below; Spock with KiKi), who was a kitten then, was getting mauled by dogs (or other cats) and I have been out searching for him late in the night, after apparently hearing sounds of a cat in distress (which others didn't hear). I eventually found only his mom and his litter mates and would come home and be on the verge of a panic attack and would have had trouble falling asleep. None of the others would "get" my feelings/panic. J would realize that there was something that had triggered me like very few other things do, but was unable to exactly understand the gravity of the situation.

Both of these Spock nights had a happy ending (so to speak) because I would leap out of my bed at dawn and go out to search for him, and I would find him safe and happy somewhere. However, these did trigger a few of my older (PTSD-triggering memories) and have been the focus of a couple of my therapy sessions.

About cats dying in my arms -- yes, I have had a couple of such experiences as well. They were not directly due to mauling, but because of infections because of mauling or abuse. Those are such strong memories, and I think, just like how this story describes it, are life changing.

Unlike the author in the story, I have never really gotten over these in a positive way. What this has made me is to be fiercely protective of the people/animals that I love, which sort of manifests in me being extremely aggressive toward people to mistreat animals. At least people who were at the table at the last Annual Meeting party would remember how I was about to pick a fight with a waiter because he was trying to shoo away a cat that was rubbing up against us under our tables.

In conclusion, I don't know why you specifically tagged me, but it made me revisit a strong/painful series of memories. But it hasn't evoked a panic response yet. So I guess it's all right. :) 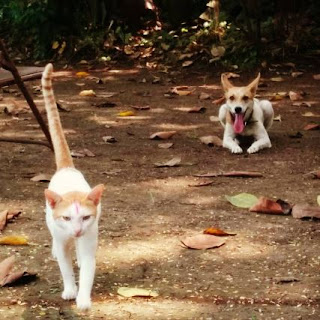