Being an elder brother comes naturally to me (a photo blog)

A couple of years back, I faced a situation that kickstarted my being-an-elder-brother-for-a-younger-gay-man mode. My friend, who calls himself Emosexual in an online chat room* on SilverDaddies.com that I initially met him in, was then a barely legal young man in another metropolitan city in India and was facing problems with his family after they discovered that he is gay.

One morning, I received a text message from our common friend Mickles1, a wonderful British man settled in California, explaining to me that Emosexual had been asked to leave his home and that he in distress and was not sure what to do. In a couple of hours, I arranged for a flight reservation for emosexual and transferred some money to his account. By that night, he was in Mumbai, and eventually stayed with me in my apartment for approximately two months before returning to his home, of course, having reconciled with his family.

I am not a very social person and living with someone else is extremely stressful for me. Yet, I was able to manage living with a precocious, bubbly, energetic young man for a couple of months. I enjoyed mentoring him, or so I hope, helping him adjust to his new role, in which he was way more independent and responsible after having come out to his family. I think I was successful in my endeavors, and I hope to have Emosexual comment on this post to ensure that this is fairly accurate.

Since then, I have faced similar situations, and while they were not as drastic as Emosexual's situation was, I still enjoy donning that role. For example, I did it with another younger man here in Mumbai, who was then involved in a rather dysfunctional relationship with my friend Frankenstein**. Although I received some help from Jay, I was involved in the mentoring role for a longer period. I enjoy such situations and I latch on opportunities whenever I get some, especially in a situation that does not involve too much of personal/social stress.

This also takes place on social networking platforms and gay personals sites as well. Here's an example of that on a very popular gay personals platform in India called PlanetRomeo. I thought I did well. I'm in grey bubbles and the young man is in white bubbles. 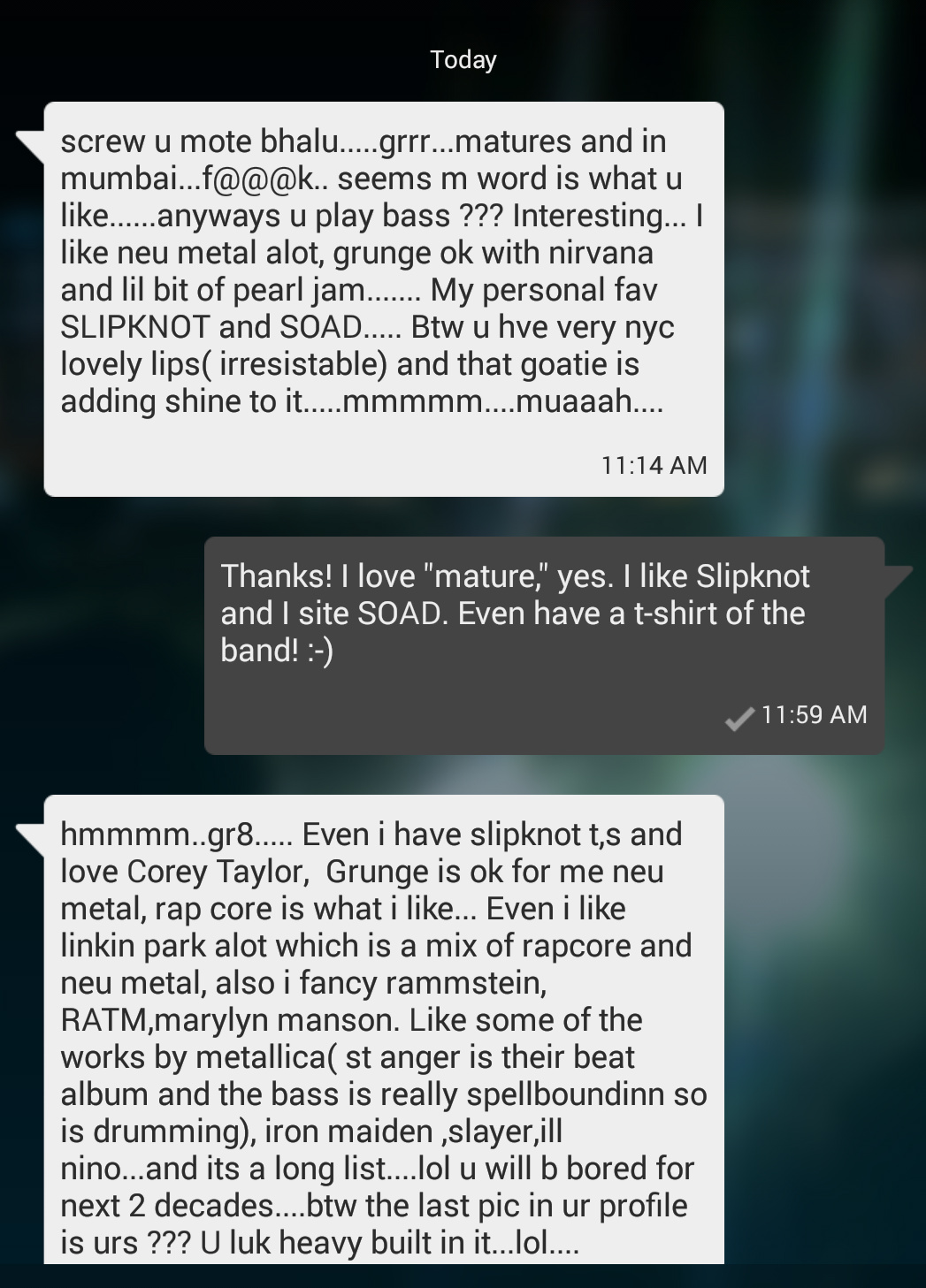 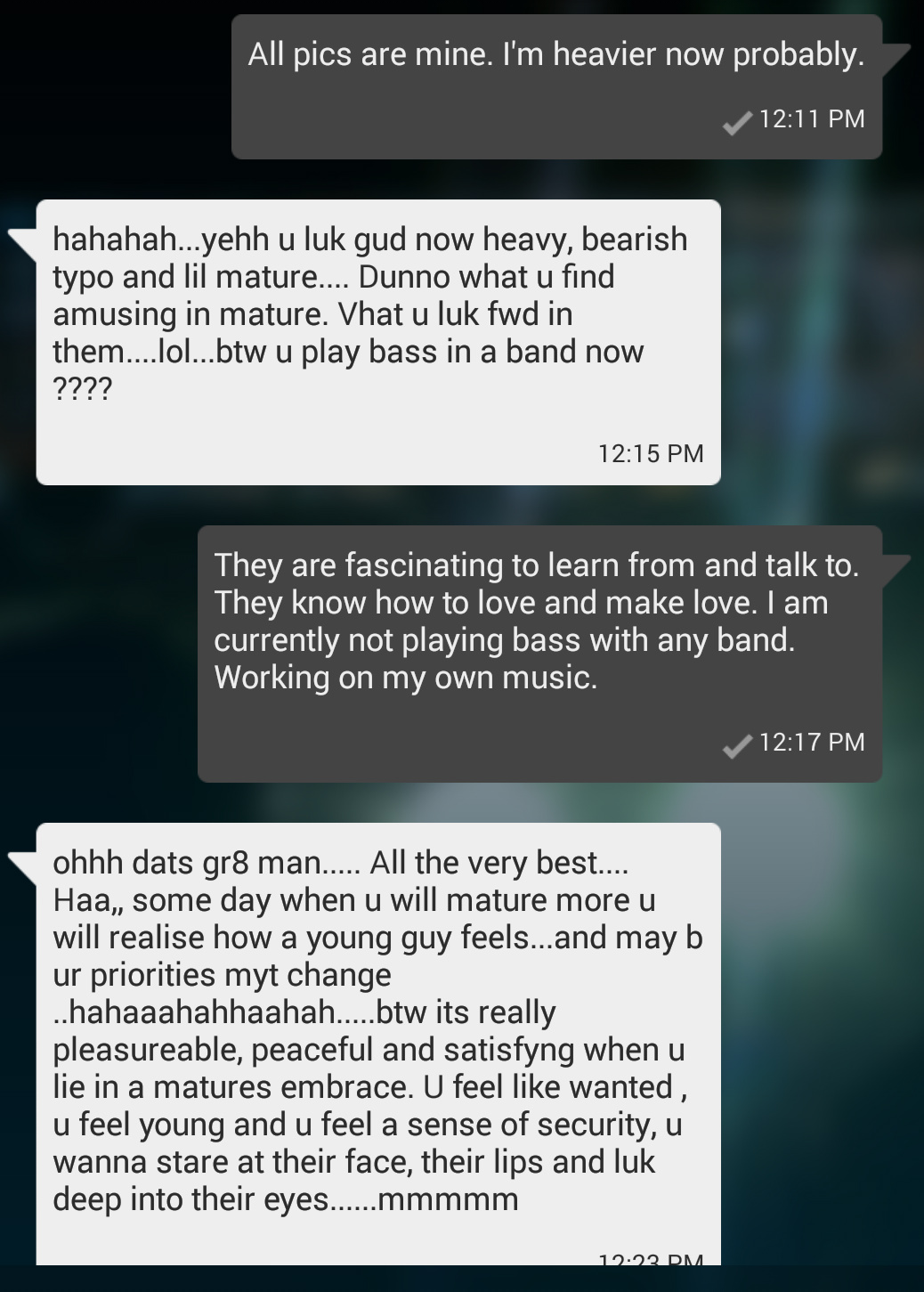 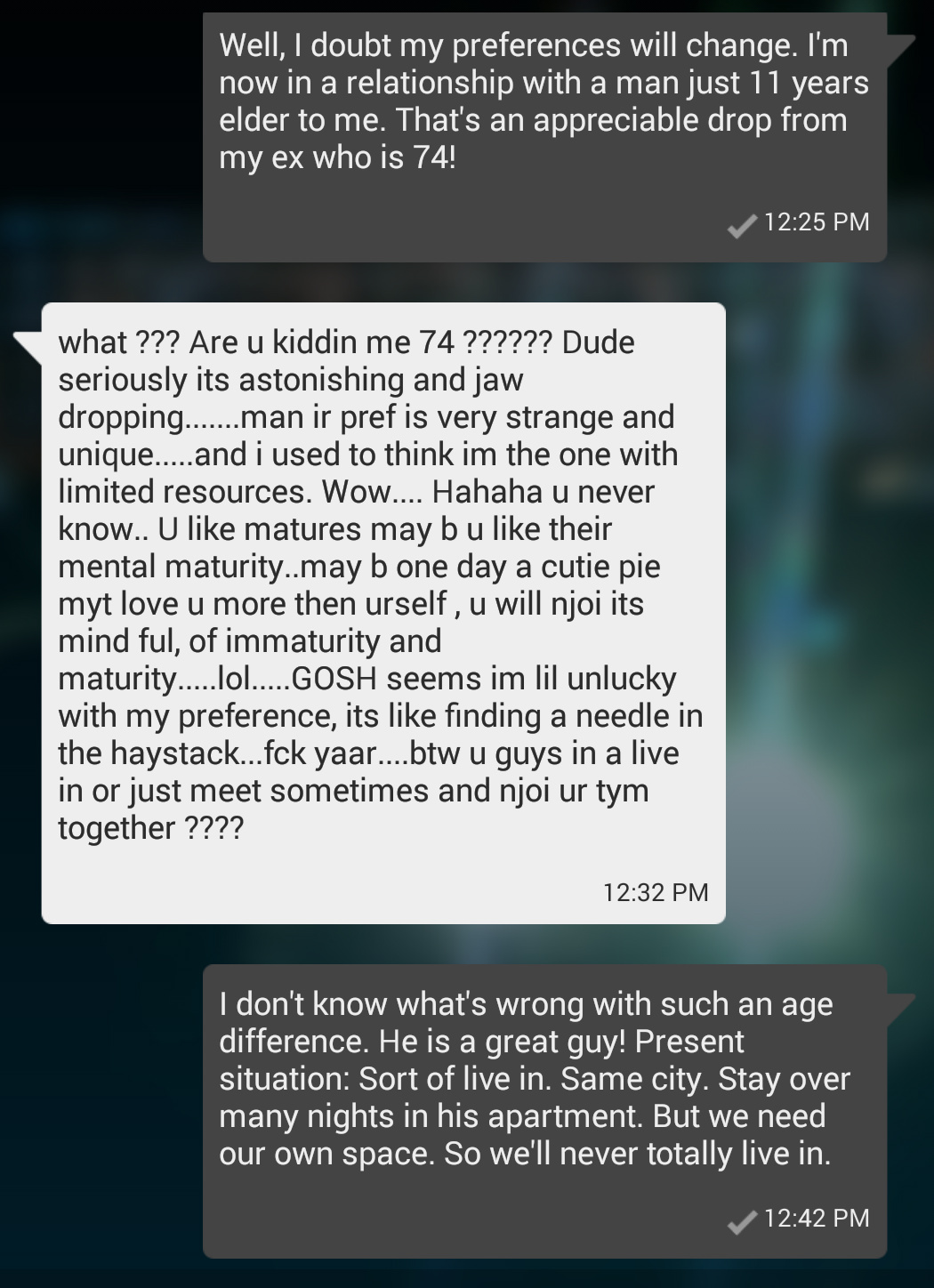 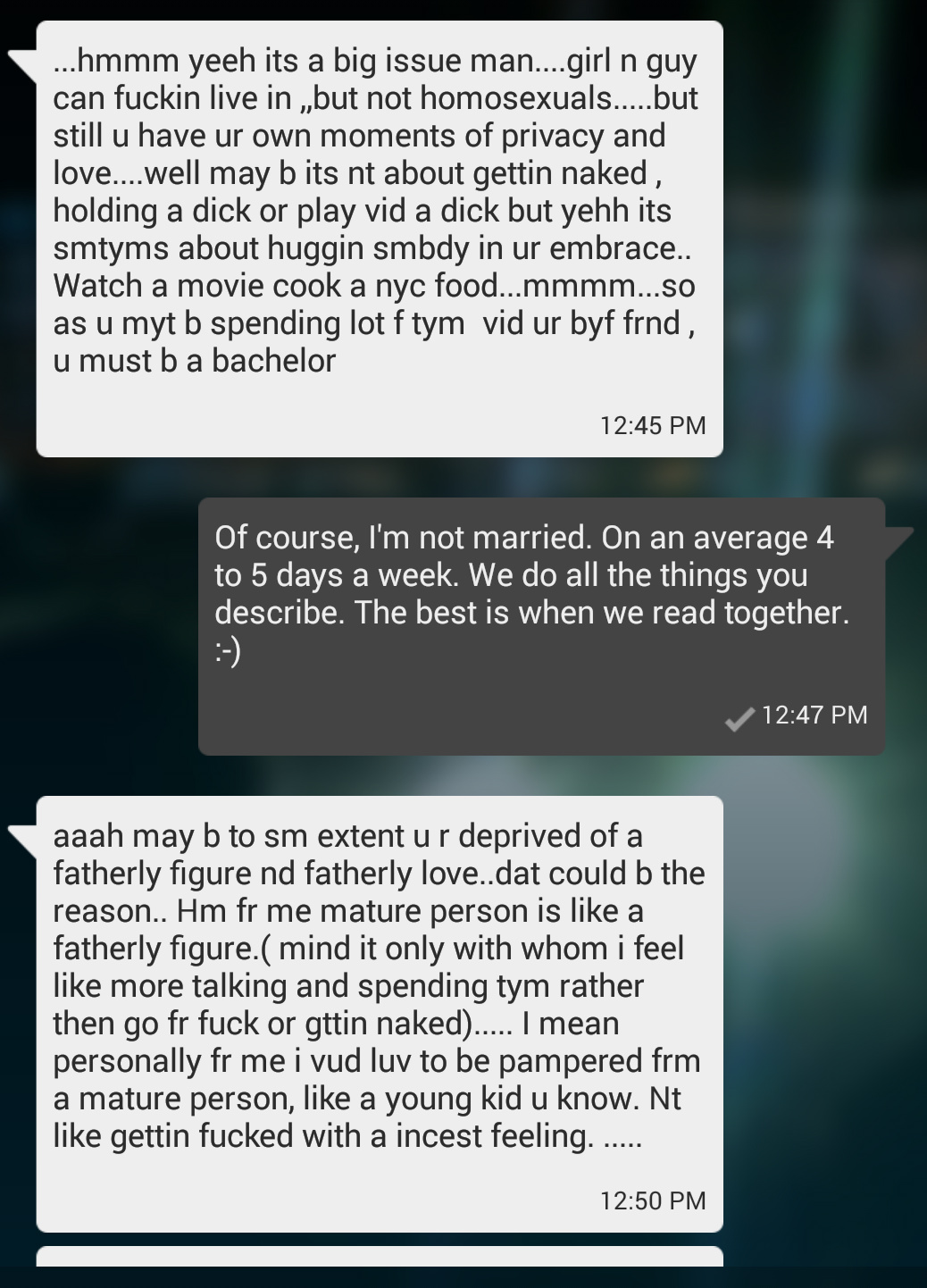 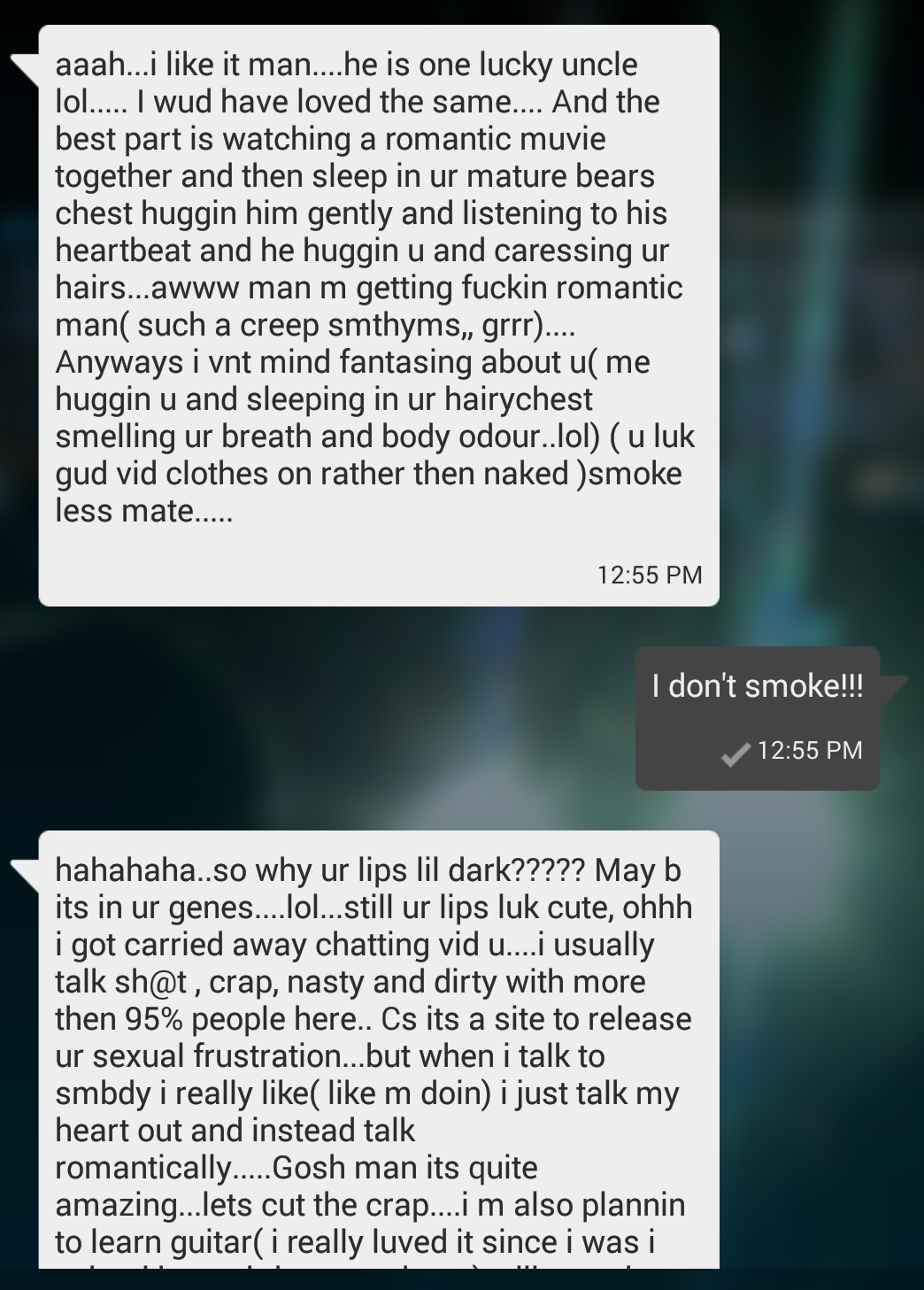 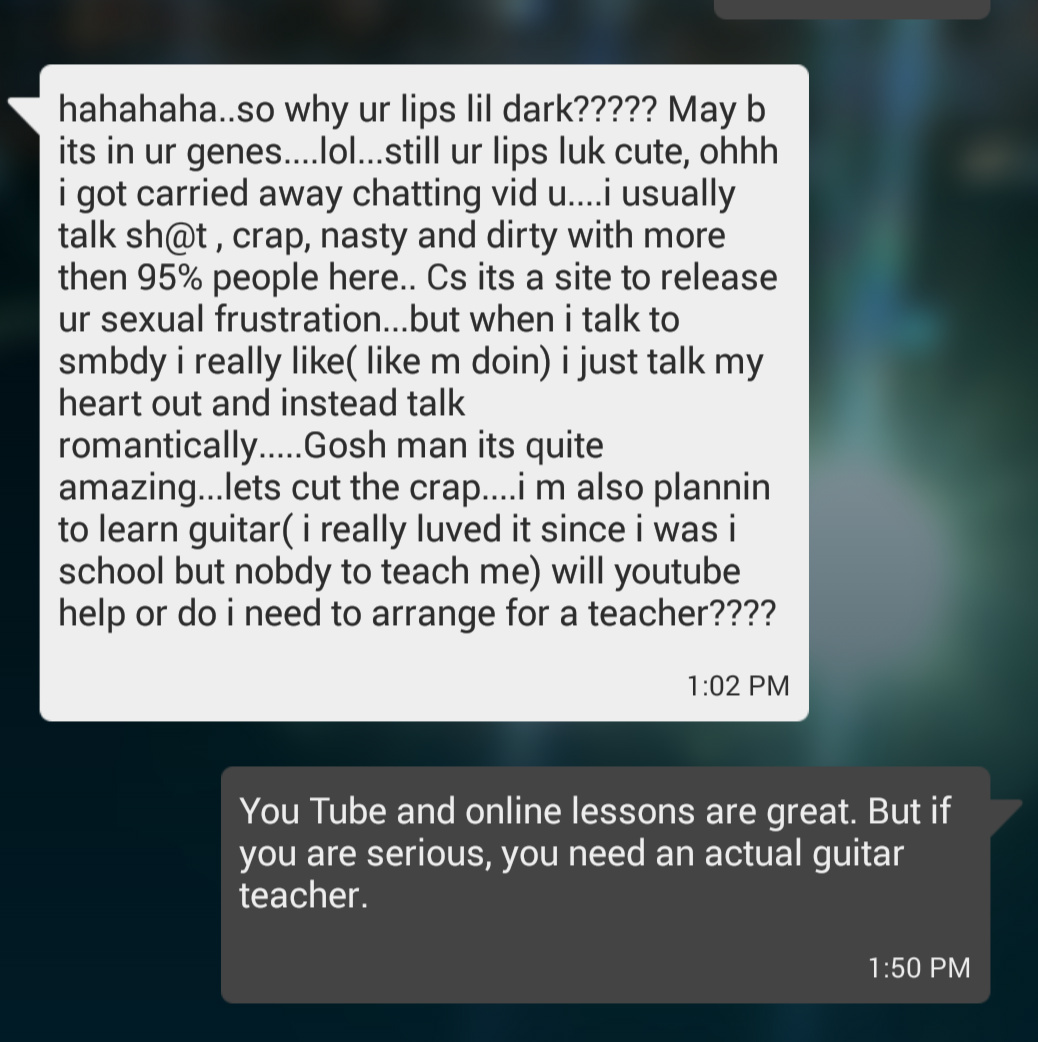 *Chat rooms are still relevant in my neck of the woods. Yes, even in 2014.
**Frankenstein is one of the most hilarious men I have ever met. He is also my movie buddy, and we go out for sci-fi monster flicks. We are planning to watch Marvel's Guardian's of the Galaxy this coming weekend.
Posted by Kris Bass at 22:32

Thank you so much my sweet bro. It means a lot for me! Have fun at the movies with *the devil*. Love you xx